I used to be a fan of post Korean and Vietnam war movies. Two of my faves were The Bridge over the River Kwai and the Bridges of Toko-Ri. Of course, they had underlying tones of pro and con war--but that's another story. Now, I am not interested in stories of destroying bridges--but rather building bridges. That is why I featured the new recreation bridge at Gray's Lake last month and the newly replaced Cedar Covered Bridge this month.

I see an anology of BUILDING BRIDGES and restoring diginity in human lives. The Des Moines Register  (November 08, 2019) featured a front page story titled "Governor (Kim Reynolds): Give Inmates a Chance." Gov. Reynolds is quoted as saying, "Prison shouldn't be a circle that leads back to prison. it needs to connect people with the opportunities to improve----." Now just a minute--I am a big believer in law and order! I strongly support a strong military defense system and our police, firefighters and others who put their lives on the line to protect ours. I certainly believe in obeying laws--but I am also a huge proponet of giving people second chances. I certainly believe everyone has to pay a price for criminal acts or breaking our laws. However, I think our big focus should be on a rehabilitation program designed to focus on a training process that will give law violaters  light at the end of the tunnel. I like our governor's thought process of providing the incarcerated with programs that will lead to work skills for meaningful employment when they are released. This, of course, needs to be accompanied with moral and ethical training that falls within the boundaries of our legal system.

In summary--I am a huge believer in second chances and that is where we come in. I like the lyrics of country singer, Merle Haggard's classic song, Branded Man--"I'd like to hold my head up and be proud of who I am, but they won't let my story go untold. I paid the debt I owed them, but they're still not satisfied. Now I'm a branded man out in the cold." Now that is a sad commentary on us. I think everyone deserves a second chance. This same anology can be applied to people transitioning from homelessness and other legal, ethical or moral situations that have "imprisoned" them. Now let the real "human life construction" begin as we do a better job of BUILDING BRIDGES.

A milestone event--The Madison County Covered Bridge Festival celebrated its 50th anniversary, October 12-13, 2019. The highlight of this event was dedication of the new Cedar Covered Bridge that replaces the old structure that was destroyed by arson in 2017. 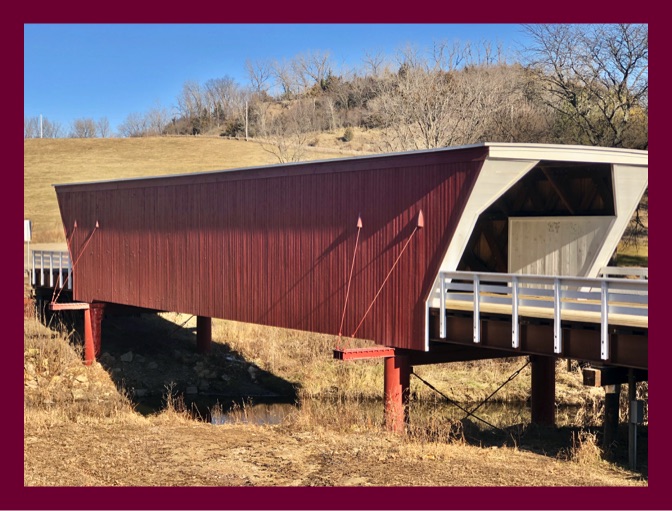